A review of the controversial Foreshore and Seabed Act says it should be repealed.

The 150-page report said the law failed to recognise Maori property rights as recognised by the courts and advanced the general interests of the public at the expense of Maori.

It recommended Government recognise that Maori with traditional interests in the coastal area have some form of customary title to it and the public have an interest in access and navigation.

The panel sets out a number of possible options to achieve its recommendations including:

* Negotiated settlements within iwi and hapu;

* Allow the courts to settle title issues; and

* A mixed model of negotiated settlements at a regional and national level.

It proposed the Government start with a new interim law that would repeal the Foreshore and Seabed Act.

This should recognise some Maori have customary rights to some coastal areas and the public have rights of use and enjoyment.

"Both must be respected and provided within the limits necessary to accommodate the other," the report said.The new law would set up principles and ways to settle customary interests and vest the legal title in the Crown until issues were resolved.

The review was announced in March by the Government and the Maori Party, which wanted the Act repealed.

The Act was one of the most difficult pieces of legislation the Labour government had to deal with in its nine years in office.

It followed a 2003 Court of Appeal ruling in the Ngati Apa case that it might be possible, in some instances, for Maori customary title to convert into freehold title where there had been continuous use since pre-colonial times.

That raised the possibility of parts of the foreshore and seabed being under Maori control, and fears that public access to beaches could be restricted.

The review said the Government made a mistake in not just appealing the decision if it did not agree with it or letting the courts sort out claims.

The Labour government decided to legislate against the ruling and after months of controversy and protest an alternative process was set up to recognise Maori interest in coastal areas.

The review said the vast majority of submissions were critical how the previous Labour government handled the issue and wanted the law repealed.

Mr Finlayson and Maori Affairs Minister Pits Sharples said in a joint statement the Government would now consider the report.

"We will take the time necessary to reach a decision in the best interests of all New Zealanders," Mr Finlayson said.

Dr Sharples said the review reflected the widespread dissatisfaction with the current law and if it was repealed there would be balance between customary rights and the interests of the wider public.

The Government hoped to make an initial response by late August. 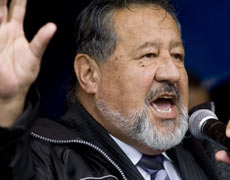